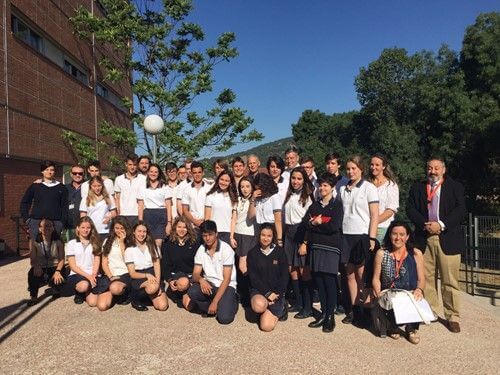 On Thursday 8th June, 29 Spanish and other international students came together for the first debating competition to be held across the Laude Group of schools in Spain.

The event took place at Laude Fontenebro School in Moralzarzal, Madrid,one of the seven schools in Spain and the competition included 7 rounds of debating, where pupil teams took part in the debates.  The topics were interesting and varied and the students demonstrated great skills not only in their confidence in public speaking but also in their use of English in the 30 minute sessions.

All the students taking part had a very exciting day and the judges were very impressed by the standards. Our school was represented by our Year 10 students Rosa Barrios, Silvia Bono, Leo Rus y Antonio Tintoré.

The International Schools Partnership – Director of Schools for Europe, Mr Nick Rugg was one of the judge and he was so impressed of the level of participants that it was impossible for the judges to decide for a winning team. Instead they decided to highlight the merit of some participants.

We are very pleased to announce that both Rosa Barrios and Silvia Bono received this special mention. ¡Congratulations!